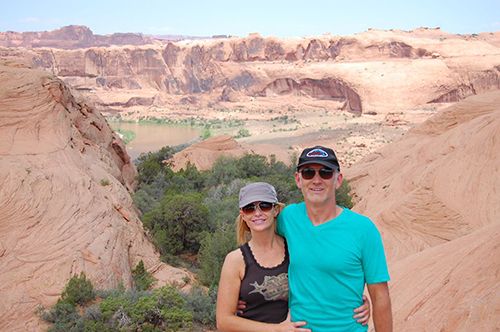 Last weekend some friends of ours invited my wife and I to go on a weekend trip to Moab, Utah. My friend (let's call him Steve because that's his name) has been a lifelong Jeeper. Steve had just acquired a new-to-him Jeep and wanted to test it out. A trip to Moab? Hell yes! We packed up and left Salt Lake City and hit the road for a 3 1/2 hour car ride to Moab, the best place in the world to test out a 4x4.

As we were driving to Moab, I thought about why, at the drop of a hat, we were going to Moab and how closely it ties to my profession. I'm a graphic designer turned marketer, specifically an Inbound Marketer.

I am constantly trying to get people out of their daily routines and do something a little bit outside their comfort zone—sign-up for a newsletter, try a new widget, switch to a new service, make an appointment or even buy a new car. All the while trying to surprise and delight.

I'll give you a little background on Moab to help you make the connection.

Historically, Moab's major local economic activity was uranium mining. In the early 1950s, fueled by the Cold War, the uranium industry exploded. Charlie Steen, a down-on-his-luck prospector, made a dramatic uranium strike south of Moab and the town became the center of activity for uranium mining. By 1964, however, the demand for uranium had decreased. The largest mine closed and hundreds of workers were laid off.

Unemployment was at 15 percent in 1984 as local mining companies continued to cut back. At the same time, Moab's population decreased by 23 percent. By the end of the decade, tourism was the only viable solution to keep Moab off the list of ghost towns in Utah.Therefore, a whole-hearted effort was made to promote Moab as a tourist destination.

Fast forward to today and Moab is predominantly a tourist based economy. With a population of only 5,000, it is estimated that over a million people visit Moab each year.

Success against all odds

But that is not the best part! From a marketing point of view, you have to look at the competition. Moab had to go up against giants like Zion National Park, The Grand Canyon N.P., Bryce Canyon N.P. and Arches N.P. which all sit within 120 miles of Moab, drawing in around 10 million visitors a year.

Don't get me wrong, Moab has some amazing sites and scenery. But when someone is picking a site-seeing destination, Moab can't compare to the Virgin River Narrows, Emerald Pools, Angels Landing, The Great White Throne, Kolob Arch, Delicate Arch, Tower of Babel, Fiery Furnace, and of course the Grand Canyon.

So how did Moab suddenly come in and grab 1/10 of the market from all the surrounding national parks?

Well if you just finished reading Seth Godin's Purple Cow (hint hint) you know what to do.

Moab created something the national parks couldn't compete against. The chink in the armor, you might say. When looking at the giant red cliffs and flowing slickrock from a distance they are unbelievable, but you really can't help but think—I'm pretty sure I could drive my 4x4 up that! Deep craters the size of a bus look really cool but what if you could drive your crawler into them and then try to get out? You can in Moab!

In Moab you can fulfill all your childhood sandbox dreams. You can't do that in Zion.

When you are letting it all out in Moab, be it on a motorcycle, ATV, Jeep or mountain bike, you feel like a kid breaking the rules. You are constantly saying to yourself, “this is too cool to be legal.” Moab took something so amazing and made it even better by adding a little adrenaline rush. Everyone wants to feel like a kid again, and when you are climbing a crack in the rocks with a Jeep you can't help but feel like a kid.

Take a look at the map I inserted. The big purple area is Arches National Park. The one little squiggly line is a horse trail with a few hiking trails thrown in for good measure.

Right below Arches is the town of Moab, and sprouting out from there is a plethora of trails: single track biking, biking share with motorized, motorized and hiking.

I'm sure a lot people end up in Moab by chance, maybe exploring it after driving through Arches or Zion. If that happens, they can rent an ATV, Jeep or take a guided tour in a Humvee.

The best part is that it never ends. You can go on two trails a day or make it a three-day weekend and hit nine trails. With over 30 4x4 trails it will take you a few years to do them all... once. I have been going to Moab for three years now and only been on five trails.

Inbound marketing lesson #4: Make your audience want to promote you and give them a way to do it.

Once they have experienced all that is Moab, they must tell all their friends with a T-shirt, hat, jacket or some original art from any of the local artists—maybe even stick a bumper sticker on their minivan at home that says: New York • Paris • London • Moab.

You can easily check out the fans for yourself, do a Google search and you'll see what I mean. Be careful as you might end up wasting a couple hours watching someone roll their brand new Rubicon.

Don't get the wrong idea. I'm not saying that National Parks should allow off-roading or anything like that. I'm simply noting that Moab makes a great case study for stepping out and doing something different and remarkable.

Inbound marketing lesson #5: When you do something remarkable, you'll have critics that will try and stop you.

Since most of the off-roading trails are on public land, Moab has more than its share of critics. I could write another blog on that. But the point here is what Moab has done to stay alive and even grow.

When you are creating content for your next inbound campaign, blog post, landing page or newsletter, remember these five lessons and make it amazing.