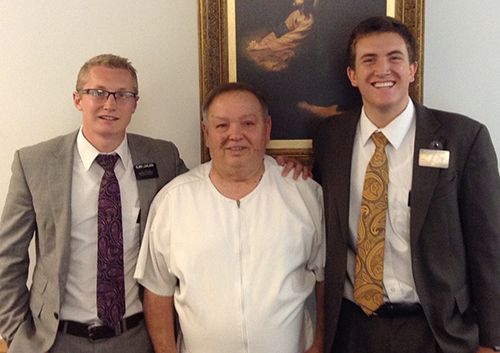 The reason I'm posting this is that my son is nearing the end of his mission and he is learning so many amazing lessons about dealing with people. Many of the same lessons I am just now learning. It is no wonder that so many RM's (Return Missionaries) go on to do great things in business. They have learned so many valuable lessons on their missions, and at the age of 20! Many are execs for major corporations like David Neeleman CEO of JetBlue Airways, Stewart Nelson COO of Novell, Ray Noorda CEO of Novell, James H. Quigley CEO of Deloitte & Touche, Frederick

I'll keep the names and places out for privacy and embarrassment.

The following is a letter home from my son, whom you will meet if you do business with FnA in the future because I'm recruiting him as soon as he is home.

So yesterday we had an experience that left me really thinking and pondering about who I want to become when I get home. Every week as missionaries we meet with the ward mission leader to discuss ways that the ward can help us in our work. So the women missionaries brought up a concern with one of their recent converts named (Mark). He was baptized on Saturday and on Sunday his father had come up from Texas to discuss with Mark's mother if Mark was going to move to Texas or get sent to foster care.

To put it frankly, Mark's mother is sick of Mark and wants to get rid of him. Mark is not a bad kid at all, so I have no idea why she's acting like this. She wants him out of the house by Wednesday.

So the missionaries bring all this up to our ward mission leader and then he said and I quote! "See the hard part is that now you've made all these problems that we have to solve." The problems being Mark still needs to be confirmed a member of the church and now he might get thrown in foster care.

I quickly interjected and explained to him our role as missionaries, the resources we have and the role of members aka Disciples of Jesus Christ. Then I tried to remind him of how everyone that spoke at Mark's baptism told him how "you're now part of the family don't ever hesitate to ask if you need anything". I guess I missed the fine print in the scriptures where it said "all blessings and fellowship not given until 90 days after membership"

After that we had a lesson about researching family history. Almost every person in that lesson complained about how they struggle with gaining motivation to do family history and other simple aspects of the gospel like praying and reading. I was absolutely floored at how these men were complaining and acting. If I had a little more sailor in me I'd have thrown a couple choice words their way.

I've learned on my mission how to do. Just do it, don't complain. Don't get mad at someone because you made a promise and now you have to fulfill it. Being a member of the LDS church is not a passive calling. This church is all about growth and becoming more. How are we ever going to do that if we're complaining about the simple things.

And then my response:

In response to your letter, you’ll find there are very few men (people) of action. You said something early on in your mission about the ten people in the ward you can depend on. Well they are the same ones you can depend on outside of church as well. I’m not saying that you have to be a doer in church to be a doer in society, I’m saying that you can’t be one person on Sunday and a different person on Monday, nor can you stand for one thing during the day and turn around and do another thing at night.  It’s called character.

When I was working in the Wendover casinos there was a high percentage of church goers in top management. Not because they went to church (none of the owners, president or vice-president were LDS) but because they were doers. If they said they would do something you could count on them to do it. The church builds men of character, it is also a great separator - those that do and those that talk about doing.

Last Sunday in the clerks office we were talking about some people on our street that are building new houses. One of the clerks was dumbfounded at how people so young could afford these lots and houses up by our house. I told him he will be there someday, and he said "well maybe when I make partner then I will be able to afford to move up there”. It won't happen.

Why do I say this? First off because you don’t “make” partner, you earn a partnership. Corporate America breeds people that believe they are entitled to move up. They want someone else to tell them what to do, how to do it and what they will get when they do it. Then they are mad when they don't get promoted. That is not how it worked for people that have made it to the top. the people at the top have risked everything on their belief that they can make a difference. If they make a difference they get to say “see my idea worked”. If it doesn't work out they get something even greater — they get the knowledge learned from their failure.

Most people in the corporate world get comfortable, settle in, and get their 3% raise, hoping to someday work up to 3 weeks vacation time. What a waste of a life.

Second reason — he is on his second marriage - this doesn’t say anything all on its own but put it together with a couple of other character traits and it can throw up a big warning sign about someone's character. A divorce is a sign of a bad decision making process, giving up before the job is done or not following up — even when there people involved (even your own kin).  Often they will throw up their hands in the middle of a project (or Job) say they are done then move on, hoping the next time will end up better. Marriage is a lot of work, compromise, soul searching and doing. But the pay-off is amazingly rewarding, sadly fewer and fewer people get to experience the reward.

I always think of the church and the plan of happiness as a business that has God as the CEO. In order for a business to work you need people that get things done, no matter what the assignment. Organizations need people that are willing to do, to learn and then just when they get comfortable in a position they are ready to learn something new — they have an unquenchable desire to learn. Those people inevitably move up the ladder in any organization that recognizes them, or they move on to an organization that will recognize them.