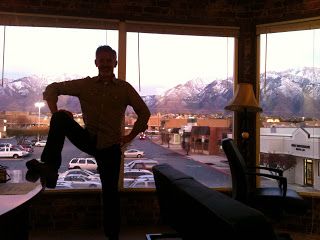 Many people around the world have heard of the mysterious Tony Loveless. As myth has it he is "zombified" during the work day.

Which is a silly myth, today Tony has already had a dance off with a neighboring office mate, which is the opposite of zombified.

The legend, Tony Loveless enjoys taking pictures in front of sunsets and letting the little cap'n come out of him. He also is known to randomly burst  out in high pitched noises for no reason in particular. We often have people shut his office door...

On the contrary to the above statement, 99% of people who meet Tony like him. IE Tony was out this morning stuffing some old dumpster (that is not for our building with trash). the man who owned the dumpster was a little upset and by a little I mean he used the dreaded "f" word. In this sentence: I am so (insert f word ending in -ing) sick of people using my DUMPSTER!

Tony walked down to the angry mans office after the occurrence and handed him a business card and also received 20% off any salon service.

That my dear friends is Tony Loveless.